Bathymetry includes obtaining recurrent measurements of the water depth, for example, to determine whether a vessel can make it to a berthing area or whether dredging is required to create adequate depth. Additionally, in dam and reservoir areas, the depth level is required to calculate the capacity of the dam year after year as siltation causes the bed level to rise, which reduces their overall capacity. In general, limited information is known about the seabed, lake, or river floors due to low-resolution or obsolete maps due to a lack of time series data. In the case of dams, the bottom is mapped only during construction: time series data are not recorded as depths will be difficult to measure over time using traditional surveying vessels. 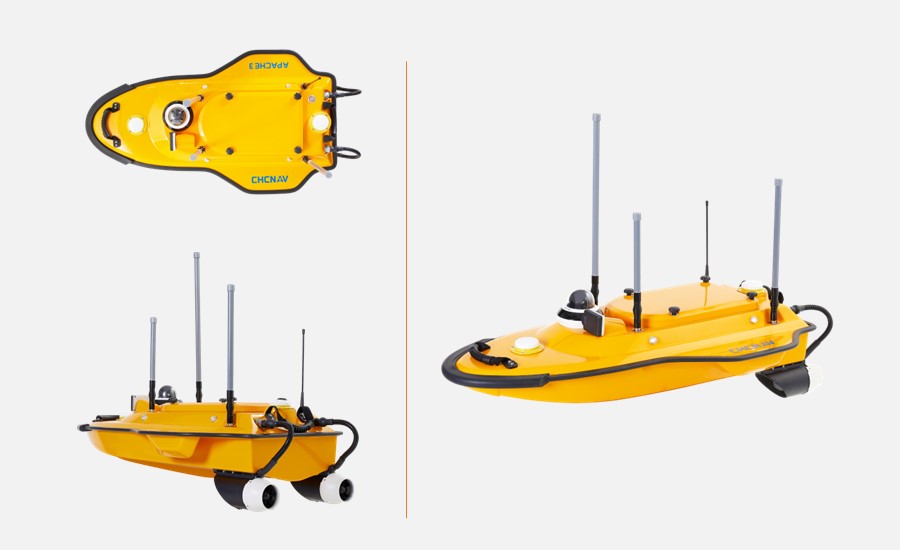 Figure 1. The Apache 3 USV, a cost-effective single beam marine drone with the dual GNSS positioning and heading sensor and IMU sensor for the bathymetric surveys of lakes,

Offering a more affordable alternative to traditional manned marine vessels, marine USVs allow bathymetric survey operations to be carried out in an automated way, with the objective to increase the range and complexity of the automated underwater tasks while at the same time reducing the need for human supervision. Additionally, their portability allows for use in remote and hard-to-reach locations.

The Apache Series (the Apache 3, 4, and 6 USVs) integrates unmanned navigation and topographic surveying technology, providing a stand-alone hydrographic solution. Its main component consists of an autonomous, self-contained hull vessel that sails autonomously to complete the given task, from bathymetric surveying and mapping to channel surveys or geological exploration. Also, it is equipped with a single beam (multibeam) sounder to find the depth and calculate the level of the seabed. Depth is determined using sonar to transmit sound pulses into the water and calculate the time interval between transmission and return of a pulse. 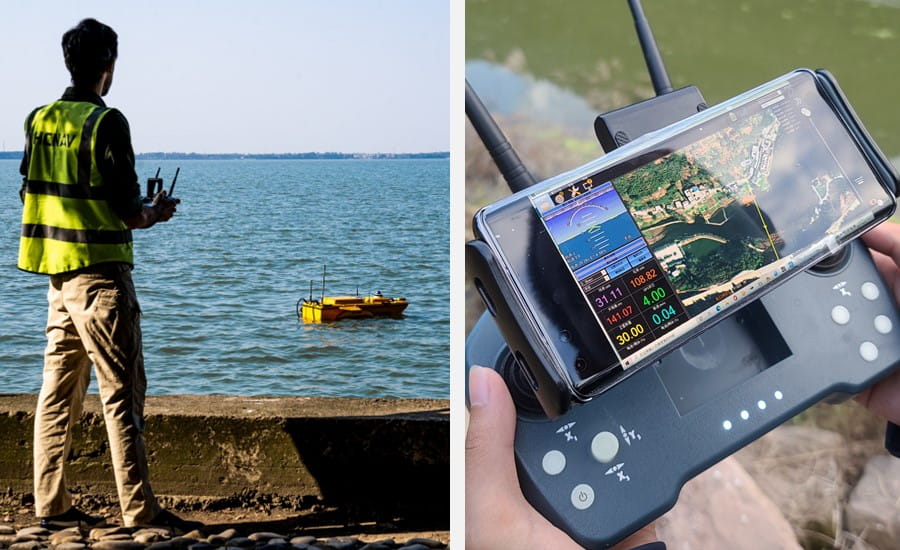 Integrating a GNSS Real Time Kinematics (RTK) system using a network of fixed ground reference stations to broadcast the difference between positions given by GNSS satellite systems and known fixed positions, improved positional accuracy is provided from the nominal GNSS accuracy of several meters to about 2-3 cm. The rover’s GNSS+INS is built-in in into the marine drone, and a base station is installed on the ground. The depth measurements are recorded using CHCNAV hydrographic survey software and transferred to the ground station through an RF communication system.

The Apache series (the Apache 3, 4, and 6 USVs) from CHCNAV is designed for the efficient hydrographic, bathymetric, and hydrological surveys of lakes, inland rivers, and coastal areas with the goal of underwater object positioning, offshore construction, underwater archaeology, and wrecked rescue. 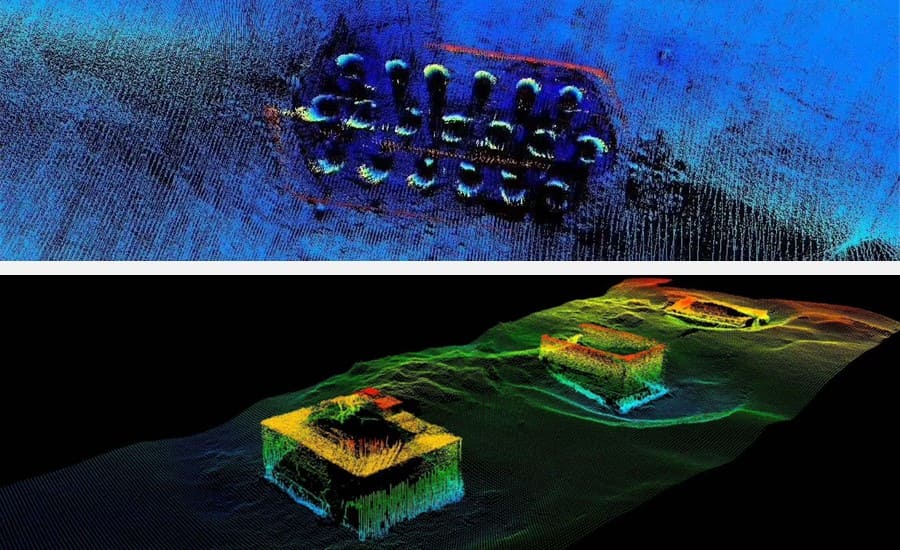 Figures 3. The 3D modeling of the bridge columns in the underwater area; the project was realized with the Apache 6 USV from CHCNAV.

The software provides 3D models of the ground, contour, and depth based on the data collected by the vessel for various user applications: the processed data can, for example, serve as a 3D baseline reference to verify the amount of silt removed. After re-mapping the same area after desilting completion, both layers can be compared to estimate the amount of silt removed. This way, the mapping of a lake’s bed mappings can be used for change detection over time. 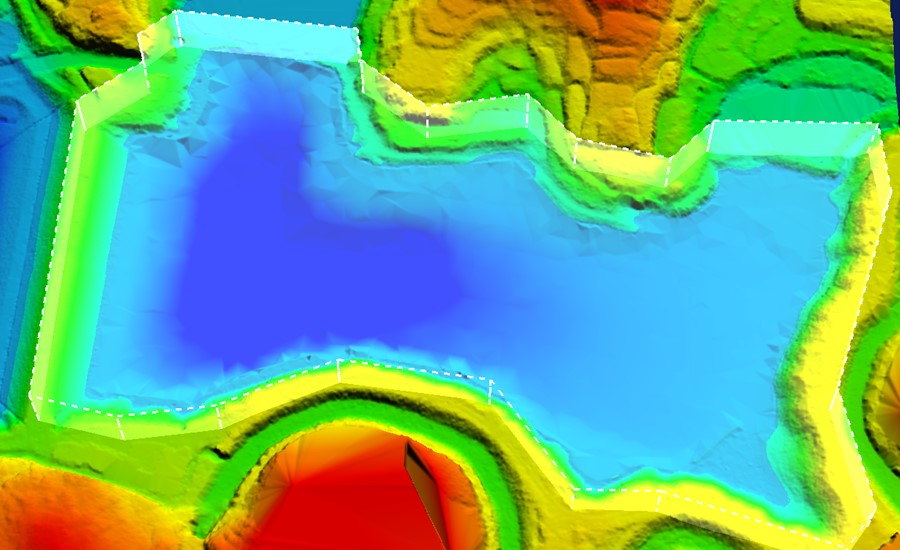 Figure 4. The 3D modeling and capacity calculation of the large water reservoir; the project was realized with the Apache 3 USV and AlphaAir450 Lidar from CHCNAV.

Robust and versatile, the USVs from CHCNAV can be fitted with instruments such as single or multibeam echo-sounder, GNSS RTK receiver, and other sensors to reduce survey time, improve work efficiency, and output high-resolution data that always match the most demanding hydrographic survey project requirements.

CHC Navigation (CHCNAV) creates innovative GNSS navigation and positioning solutions to make customers' work more efficient. CHCNAV products and solutions cover multiple industries such as geospatial, construction, agriculture, and marine. With a presence across the globe, distributors in more than 120 countries and more than 1,500 employees, today CHC Navigation is recognized as one of the fastest-growing companies in geomatics technologies. For more information about CHC Navigation [Huace:300627.SZ], please visit: https://www.chcnav.com/about-us/overview