Bathymetry is the study and mapping of the seabed or lakebed. It consists of obtaining measurements of the depth of the ocean or lakes and is equivalent to the mapping of the earth's topography. In general, only limited information is known about seabed and lake beds. Existing maps of the seabed are often low-resolution or obsolete.

In the case of dams, the bottom is mapped during construction, and time series data are not recorded as depths will be difficult to measure. Due to the water inflow, a large amount of silt will settle in the dam, reducing the depth of the stored water. In this application, Apache series is suitable technology as it can measure depths of up to 300 m and provide its exact GNSS position. The data can be used to estimate silt deposits that scour the channel bottom, etc.

The seabed level must be accurately measured to determine whether a vessel can make it to the berthing area or whether dredging is required to create adequate depth. The depth level is required in dam and reservoir areas to calculate the capacity of the dam year after year. Due to the constant movement of water through these dams, siltation causes the bed level to rise, which reduces their overall capacity.

This paper explores the various features of Apache USV series for efficient seafloor level mapping. The CHCNAV hydrographic survey software is used for data recording and analysis.  It provides results in the form of 3D models of the ground, contours, and depth. 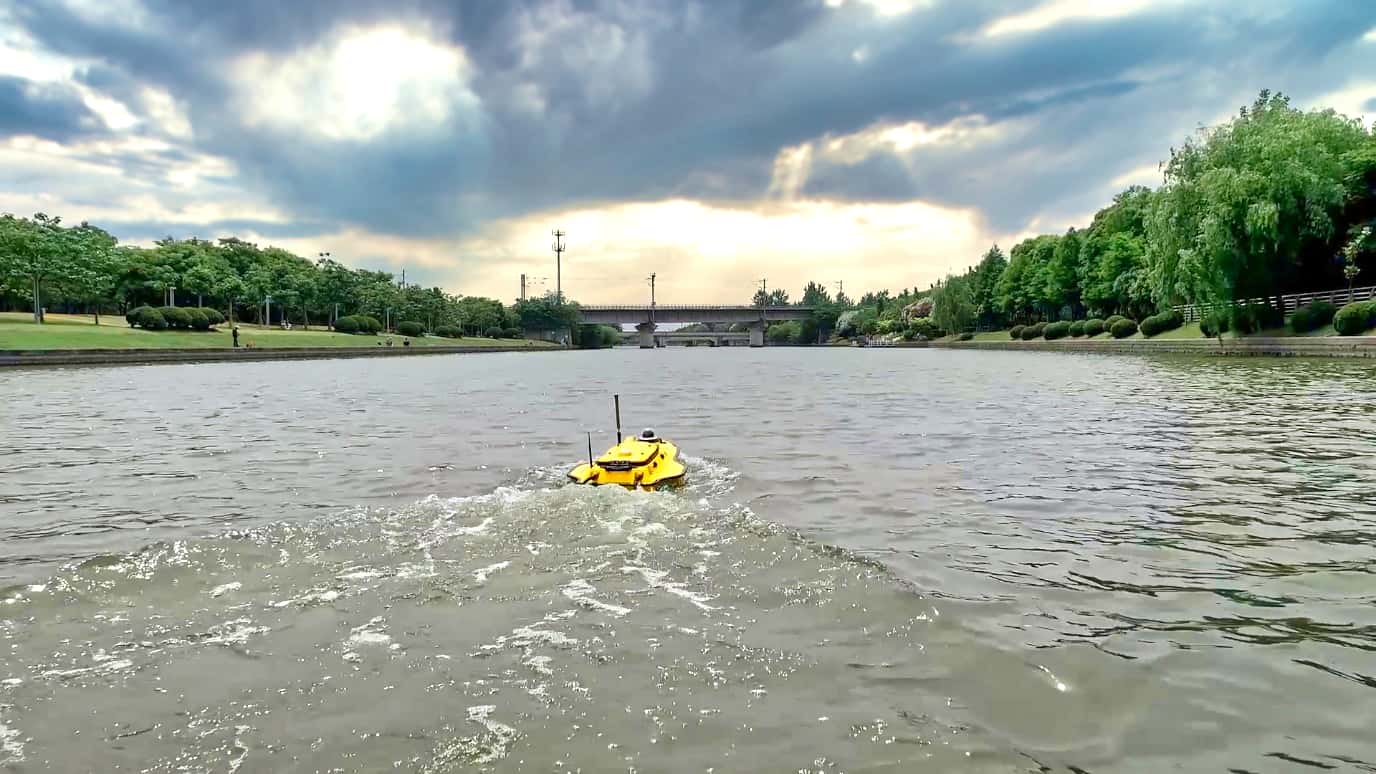 The Apache series is self-contained hull vessel, made of carbon fiber macromolecular polyester. Carbon ﬁbers are widely used in the manufacture of advanced materials due to their excellent properties, such as high strength and modulus speciﬁc, low expansion coefﬁcient, and relative ﬂexibility.

Autonomy is a central aspect of unmanned marine applications. The objective is to increase the range and complexity of underwater tasks that can be automated while reducing the need for operator supervision. Two of the most important issues for the implementation of unmanned vehicles on a large scale and in a tight timeframe are system reliability and manufacturing costs. Compared to the field of drones, such as UAVs or ROVs, less R&D has been carried out in the field of marine USV. However, in recent years, significant progress has been made in several aspects, such as hardware design, system development, collision avoidance, trajectory planning, platform design, collision avoidance, controllers, modeling, stability, and energy management.

The Apache series features a differential GNSS to provide centimeter-accurate position data. The rover's GNSS is attached to the marine drone and the base station is installed on the ground.  It is equipped with an RF communication system for data transfer to the ground station and has a live PTZ video camera.

The Apache USVs are portable to enable bathymetric surveying and mapping, channel surveys, underwater geological exploration, etc even in remote locations. The system reduces risks to human safety and improves the flexibility and efficiency of underwater surveillance and hydrographic surveys. The hull uses anti-corrosion sealing technology, which is suitable for different types of mission environments.  It sails autonomously to complete the task according to the mission plans.

The echo sounder is a type of sonar used to determine water depth by transmitting sound pulses into the water. The time interval between the transmission and return of a pulse is recorded, which is used to determine the depth of the water as well as the speed of sound in the water at that time. Distance is measured by multiplying half the time between the outgoing pulse of the signal and its return by the speed of sound in the water [T÷2×(4700 feet per second or 1.5 km per second)].

The Apache series are equipped with a single-beam sounder to find the depth and calculate the level of the seabed. The Norbit® multibeam echosounder (MBES) for oceanographic operations is also available in the Apache 6 series, providing not only a reliable bathymetric chart, but also a backscatter resistance (BS) profile of the seabed. This information is used in various applications, such as seafloor segmentation and characterization, and inversion of geophysical parameters.

The Apache series integrates GNSS Real Time Kinematics (RTK) system to provide improved positioning accuracy from the nominal GNSS accuracy of several meters to about 2-3 cm. RTK uses a network of fixed ground reference stations to broadcast the difference between positions given by GNSS satellite systems and known fixed positions.

The Apache is compact and light to facilitate transportation. A ground communication system is installed and connected to a computer for the transfer of data from the marine drone. A RTK base station is set up to allow precise positioning.  The navigation plan with the survey limits are generated and is uploaded onto the Apache navigation system.

Once on autopilot, the Apache USV follows the mission plan and collects data at predetermined points and transmits it to the ground station, where it is stored on a computer. This data can then be processed using the CHCNAV HydroSurvey software and 3D models of the subsurface, contours, and depth graphs are generated. In port areas, the seabed level is measured to determine where a ship can go to berth and where dredging is required.

In the following cases, the projects were uploaded to the Apache USV using a radio bridge, the data collection rate set at one point every meter and GNSS set to output NMEA at 1 Hz.

Project 1: map the seabed in the existing port area with a 10 m line spacing. The echo sounder and GNSS receiver were connected to the HydroSurvey software. The data acquisition procedure is started, and the autonomous mission is defined. The Apache USV navigates to the start location and begins capturing points along the predefined course line. Once the mission is completed, it returns to its original location.

The processed data is used to prepare the 3D model of the seabed and the generated contours. Figure 2 shows an example of a contour map. 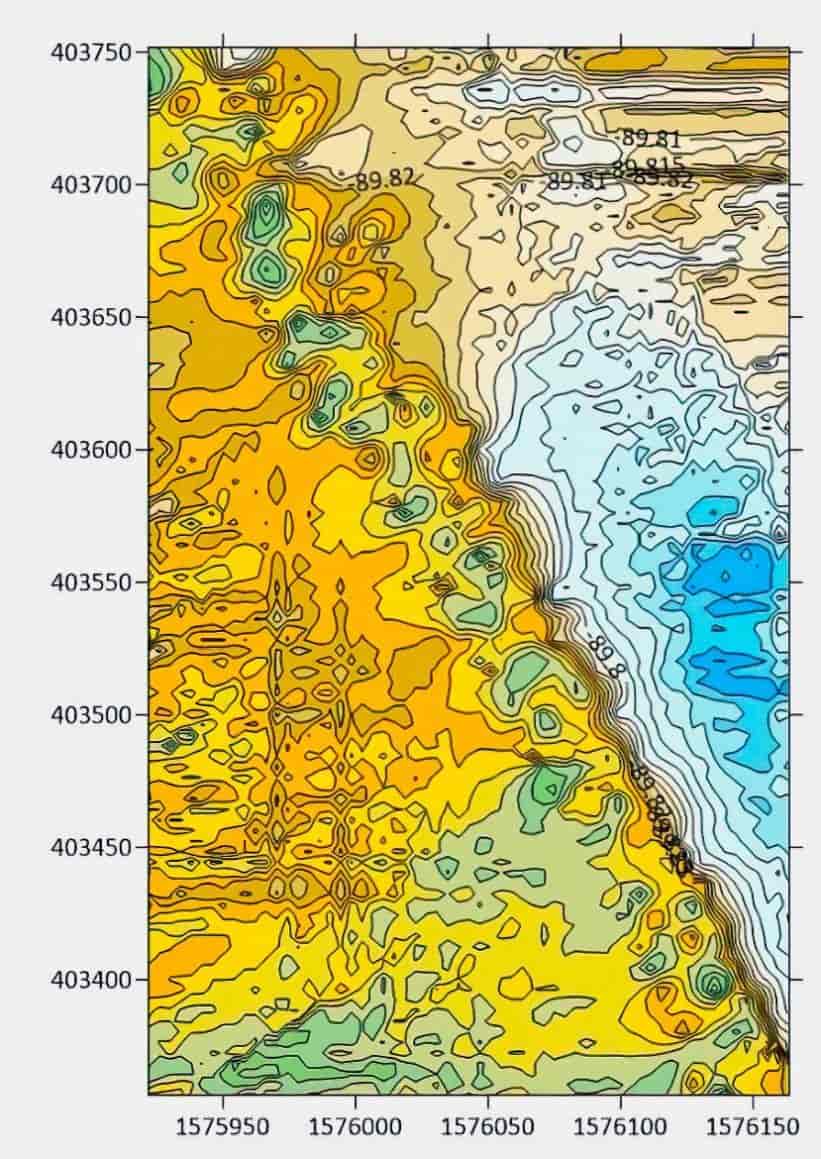 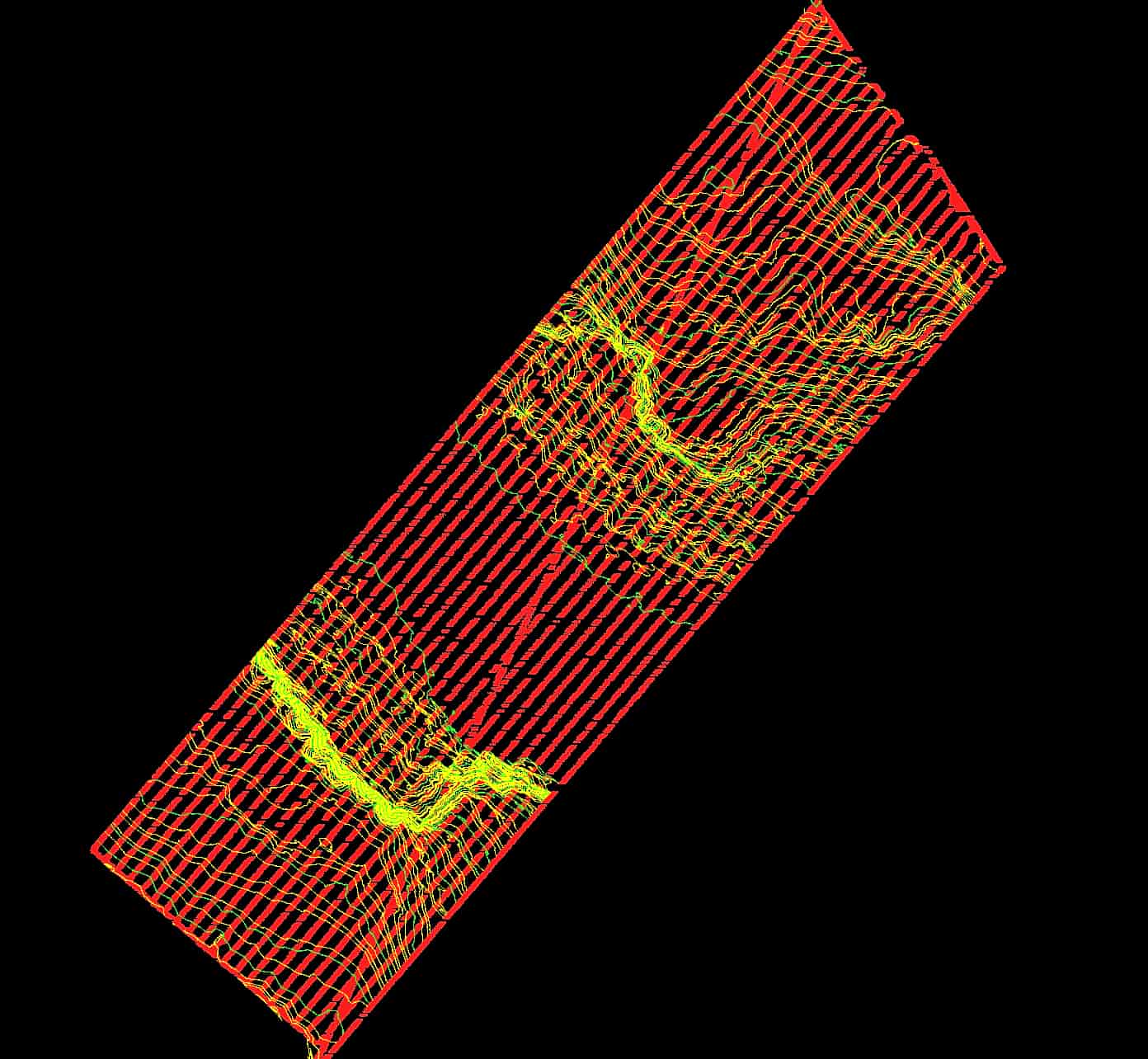 Project 3: mapping of the bed levels of a lake.  The processed data are extracted and used to prepare a 3D model that will be used as a baseline reference to verify the amount of silt removed. The area will be re-mapped with the USV after completion of the lake desilting. Both layers will be used to compare and estimate the amount of silt removed. 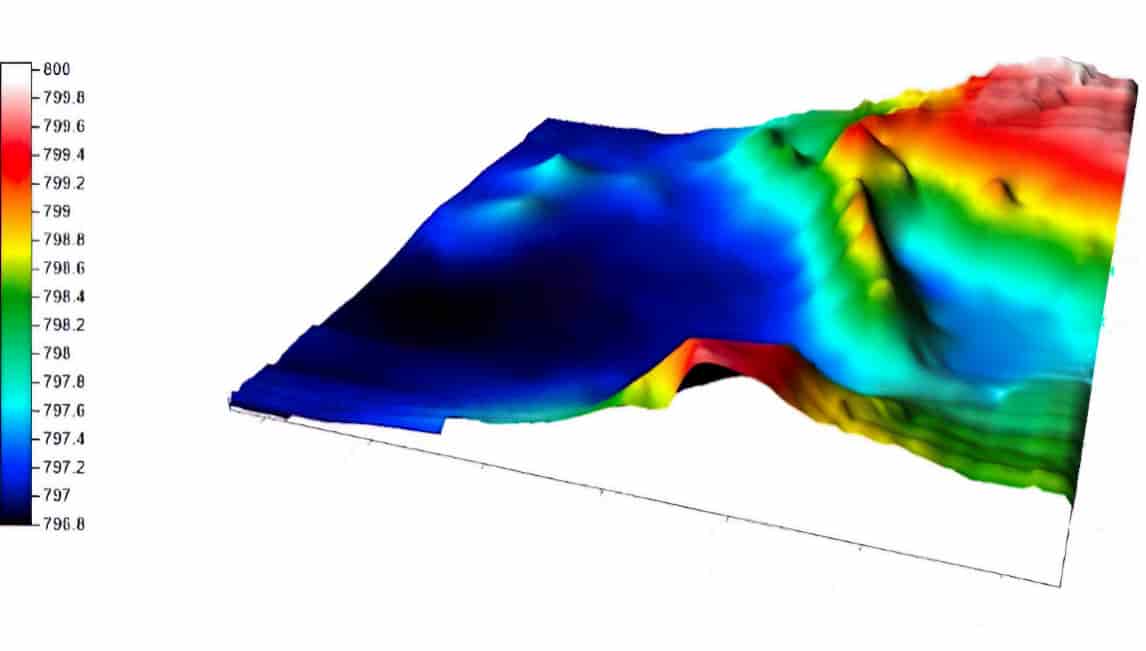 Various methodologies have used in these projects to effectively map riverbed and seafloor levels. The proposed methods have a variety of applications such as calculating the capacity of dams, de-silting riverbeds, and reservoirs. The results accurately represent the depth and level of the seabed using 3D terrain models, contour lines, and depth maps. 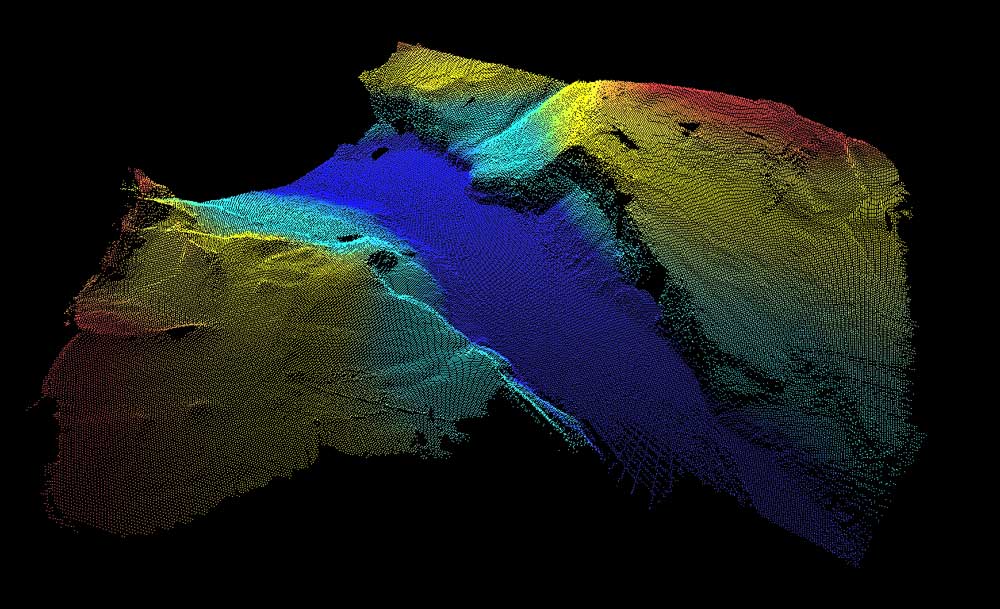 The use of marine UAVs allows bathymetric survey operations to be carried out in automated mode without having to mobilize a traditional survey vessel, thus increasing the productivity of bathymetric surveys. Their portability allows their use in remote and hard-to-reach locations. The continuous development of technologies embedded in marine drones such as the Apache Series combined with their affordability have triggered their adoption by marine surveying professional and their widespread use.